Perhaps the most paradoxical thing on earth is love. You can be in love or out of love; you can buy it, steal it, regret it, make it, fake it, hell – you can even bake it (or cook it, to be more politically correct) but above all, you cannot escape it. Love invades our life in some shape or form at some juncture during our existence. It can make you do ‘strange’ things: like eat an “apple” because “she” told you to or kill yourself because you thought that your lover was dead. Whatever the circumstance and eventual outcome, we’ve all had an encounter with that bad, um, I mean good four letter word. So, what’s all this rambling about love, you might be asking yourself? Well it’s the main theme in Star Family 868 ‘s Moulin Rouge; a stage adaptation of the popular 2001 jukebox musical film of the same name, whose matinee performance  I attended on Sunday 26th April 2015. 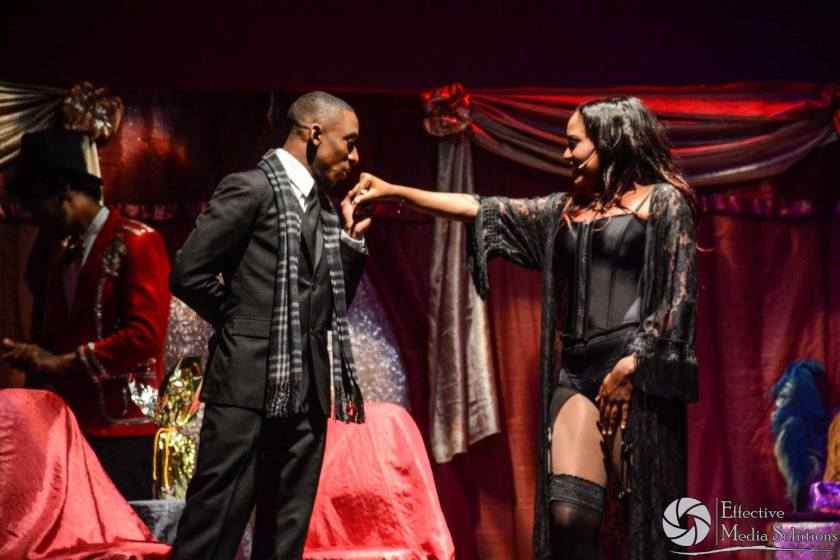 In what was her directorial debut, Ms. Ketisha Williams – a budding theatre enthusiast and recently crowned Miss Commonwealth Caribbean and Miss Commonwealth Culture 2014-15, did an outstanding job in replicating a production of such magnitude using young, local (and generally unfamiliar, to me at least) talent in the process. I can only imagine how feverishly she and her production team and actors worked on getting every thing perfect. So a big Kudos to her and Star Family 868! I thoroughly enjoyed the fact that not only the lead actor-Nicholas Subero, and actress- Cherysh La Touche, have magnificent vocal ability but many of the other actors who had singing parts were able to “carry a tune” as well. I mean, this is a musical after all, so good singing is required. Satine aka the “Sparkling Diamond” (Cherysh) has a royal voice and was easily the best singer present. Satine’s foil, Christian (Nicholas), proved that he was able to hold his own as well when it came to crooning. I also liked the director’s use of green lighting to depict the Absinthe which was being consumed in the opening scene. The costuming and set design was congruous with the theme and setting of the piece  while the choreography by Michelle Pilgrim and musical direction by Reuel Warner clearly illustrated the amount of time, effort and energy the cast put into rehearsing- they were spot on. Despite the actors being young in the industry and in appearance too, they all showed immense potential. The spoken lines were translated to the stage in verbatim –for the most part if not all- and while not necessarily directed to be ‘Trini style‘ the actors still managed to bring something to the piece that was authentically ‘us’– which was very much appreciated. 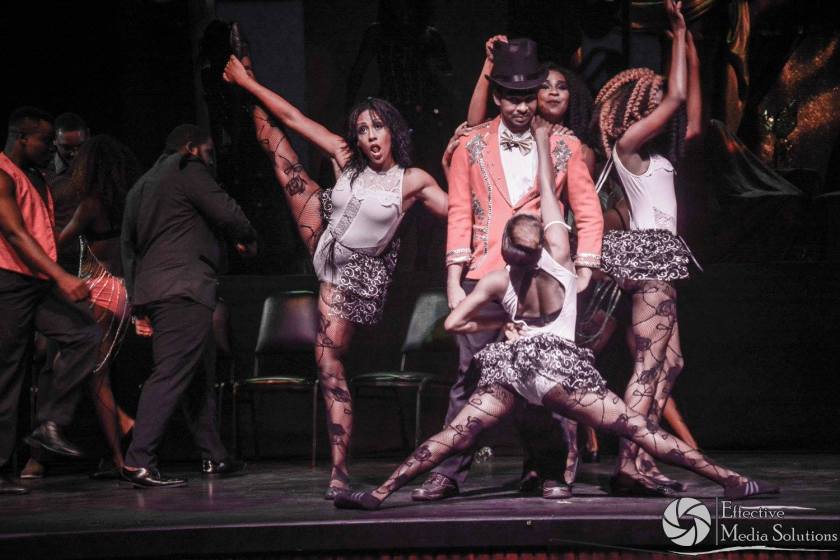 That being said, I was looking forward to viewing a programme and was disappointed to learn that none were available, perhaps this could be addressed for future showings. In what I would describe as the ‘prelude’ Toulouse’s,(Mario Wilson’s) opening musical is sometimes drowned out by the chorus/choral. This was a little disconcerting to me due to the fact that my ears are ‘semi-dyslexic’, so it was a bit difficult to hear all of his lyrics in that particular instance. My biggest concern however, was with the timing of the play in relation to the placement of the intermission. Theatre making is both an art and a science and to my mind’s eye, the director did not find the ideal position between the play’s climax, and the denouement and resolution, to place the intermission. Superficially using time as the only determining factor, the first act was approximately 1hr/20mins while the second act was roughly 30mins. Something seemed unnatural about where the intermission was placed; thereby, making the play feel lopsided.

In retrospect, the play was well adapted by Ms. Williams and her cast. The audience were highly entertained from start to end and we were rolling in laughter at various points throughout. In spite of the fact that this play can be viewed as a romantic tragedy, the cast was able to lend it a ‘Trinbago’ flavouring which enhanced the comic relief already present. Ms. Williams is desirous of having future showings of her adaptation on the “North” side of Trinidad in the near future after all logistical considerations have been worked out. If the opportunity should ever arise for you to go and view it, please do not hesitate to do so. In closing, as far as Christian is concerned: “The greatest thing you’ll ever learn is just to love and be loved in return” but maybe I can offer Christian some scant words of consolation: “Tis better to have loved and lost than never to have loved at all.”