In celebration of their 10th Anniversary, The Classical Music Development Foundation of Trinidad and Tobago (CMDFTT) staged Wolfgang A. Mozart’s Cosi Fan Tutte, a romantic comedy is set in 18th century Naples, under the musical direction of June Natheniel, as part of their two week Opera Festival which runs  at Queen’s Hall from the 19th to 28th June 2015. The CMDFTT described the Opera Festival as “the culmination of many years of successful performances” and this performance was no different. There are very few occasions I can walk into a theatrical space and feel confident that the production will be of a high standard. But on Friday June 19th as I made my way into Queen’s Hall for the opening night of Cosi Fan Tutte, I knew I was not going to be disappointed.

The opera opened with Don Alfonso’s, (Daniel DeCranie-Pierre) wager with his protégées, Guglielmo (Justin Welsh) and Ferrando (Diego Godoy-Gutierrez), that their two fiancées, Fiordiligi (Natalia Dopwell) and Dorabella (Maegan Pollonais) respectively, were no more trustworthy in matters of love than any other woman. As the women sang of their love they were interrupted by Don Alfonso who told them that their lovers have been called away to the war. As the couples parted, they pledged their faithfulness to each other again. Don Alfonso bribed the maid, Despina (Stephanie Nahous), to urge the women to find other lovers but they declared their constancy. Guglielmo and Ferrando returned disguised as Albanians but the women remained firm in their faithfulness. When the men pretended to take poison necessitating the attentions of Despina disguised as a doctor and using the magnetic techniques to effect a cure the women seemed to waver. In the second act they agreed to Despina’s suggestion of harmless flirtation, each unwittingly chose the other’s partner. The success of the two Albanians, in spite of Fiordiligi’s more prolonged resistance, led to a wedding with Despina disguised as the notary. After the wedding the men appeared as themselves and pretended shock and horror at what was afoot, before revealing their plot. All ended happily though, as Don Alfonso urged the power of reason in these circumstances. 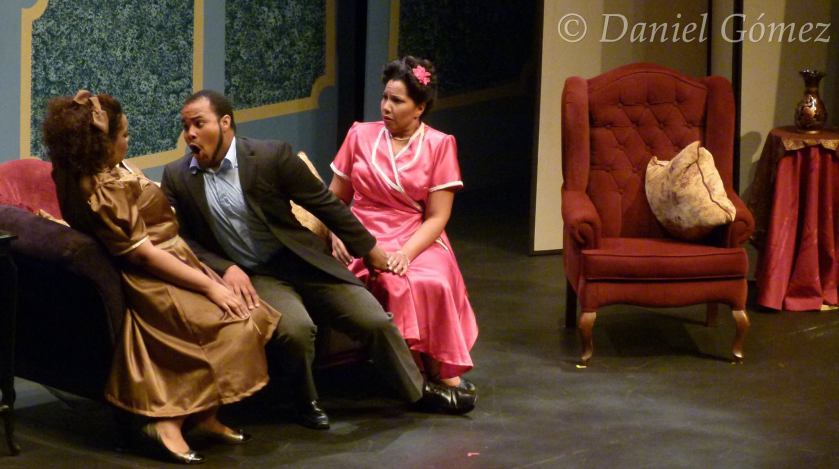 At this junction, I have to express how extraordinarily proud I was of the leading men. I often see theatrical productions where male performing artists are awkward or uncomfortable on stage. It speaks volumes about their commitment to their craft and I was delighted that the men of Cosi Fan Tutte committed to their roles and its development on stage. With that being said, however, I did not fully agree with the characterisation choice for Don Alfonso. Don Alfonso was the old Philosopher with the two young protégées, but Daniel DeCranie-Pierre’s portrayal was akin to peer which left me constantly questioning the teacher-student relationship dynamic throughout the opera. Despite the unclear nature of the relationship, I was able to appreciate Don Alfonso’s worldly wisdom in the matter of love as DeCranie-Pierre played his role of the mastermind who ensured that he engineered the series of events to win the wager. DeCranie-Pierre provided significant comic relief as his character played with the emotions of his co-actors. In the roles of ‘Guglielmo’ and ‘Ferrando’; the young soldiers and protégées who were swooning with love and believed that no matter the circumstances their wonderful fiancées would never be unfaithful, Justin Welsh and Diego Godoy-Gutierrez were a great duo and were able to play off each other’s energies on stage. But there were a few moments of tentative acting on stage on the part of Godoy-Gutierrez which allowed Welsh outshine him. That tentativeness continued with his interaction with his love interest, Dorabella. Was it Opening night jitters? Maybe. But overall DeCranie-Pierre, Welch and Godoy-Gutierrez created pore-raising moments which made me proud to be a male thespian.

Not to be out done in any way, were the women of Cosi Fan Tutte, Fiordiligi (Natalia Dopwell) and Dorabella (Maegan Pollonais) and Despina (Stephanie Nahous). Fiordiligi and Dorabella were sisters which Dopwell and Pollonais portrayed well. Their fantastic chemistry on stage made their characters’ relationship believable. My favourite performance came from Dopwell though who embodied an 18th century woman from Naples exceptionally well; every movement and mannerism created a complete character. Nahous got an opportunity to show off her acting chops as she portrayed the Despina, the maid, the Doctor and finally the Notary before the big reveal of the plot at the end. Like Don Alfonso, Despina was worldly voice on matters of love but in her case for the women but I did not like the choice in always having her portray a sassy maid throughout the play. In my opinion, the role was not believable especially in the context of the 18th century. I would have preferred contrast of false subservience when dealing with the women who she works for and her true sassy nature when she was with the men, which would have added a greater element of comedy.

The piano accompaniment, staging, set and costuming were all very pleasing and enhanced the story. Though most of its members were very young in age, the chorus was commendable; I could sense their commitment and I applaud their professionalism. The projection with the English translation of the Italian had me a bit torn. Though I understood its functionality for audience, at times I felt it was a bit distracting as it pulled focus from the stage. Music is universal right? Love and all its trapping are universal right? The actors took us on a journey of different human experiences and I believe that was sufficient to compensate for the opera being in a foreign language. The cast was absolutely phenomenal vocally and able to engulf the auditorium with their melodious, operatic voices. I was not surprised at all and they surpassed my expectations. Dopwell’s adaptability, Pollonais’ sensitivity, Nahous’ versatility, DeCranie-Pierre’s comedic timing, Welch’s enormous presence and Godoy-Gutierrez’s vulnerability makes this a captivating, must see production. I was engrossed from beginning to end and wanted more.

Do not miss your opportunity to witness this showcase of talent and world class performance at Queen’s Hall on Wednesday June 24 at 1:00pm which will be the Highlights for Children and full performances on Friday June 26 at 7:30 pm and Sunday June 28 at 6:00pm.