It seems as though whenever I return to this blog, a million and one years have passed, and I must apologize for my hiatus… Sorry folks 😦 . On the up hand though, my hiatus has been a consequence of getting more work, so when I am not on a set or a stage I am in a rehearsal “I can’t I have rehearsal” has become my motto in the truest sense. I used to tell myself I would write reviews when I get the time… but time is one thing I cannot find these days. However when I am inspired, the time finds me. After the opening night of Fifth Business’ “Sangre Grande by Two” on May 30th 2014 at the Little Carib Theatre, there has been a monkey on my back (and I mean that in the best possible way) saying that I need to write.

“Sangre Grande by Two” is based on a true story, written by Ronld Amoroso and  Directed by Brenda Hughes. It follows the central character; the chauvinistic, womanizing and  obscenely hyper masculine, always-needs-to-be-in-control “Rufus Ford” aka “Flash” [Errol ‘Blood’ Roberts]. Rufus  has been carrying a chip on his shoulder from his child hood; the contempt for his mother – a sentiment which he has come to superimpose on women in general and a strong  determination to not end up like his father who he says was driven to madness by her. These qualities  have shaped his relationship with his family and in turn have informed how his family defines their own identity. His common law wife Martha Modeste [Theresa Awai], remains tethered to Rufus  in spite of suffering constant verbal humiliation and abuse, privately, in the presence of their son Adrian Ford [Levee Roduiguez] as well as their ‘well to do’ neighbors, the nosy and defiant  “Babsie” [Anne Louise Tam] and “Lio [Keino Swamber] her pushover husband, yet as a sad consequence of the human condition, she (Martha)  just wants to be married to her abuser because  it represents stability as well as a form social acceptance. Rufus on the other hand equates marriage to “Clipping his wings and putting chain on his foot.” He always moves on his own beat –family and friends be dammed… Ah mean how yuh cud use d boy college fund??.. oops! I have to be careful not to give away too much of the story. Coming to think of it, the central theme seems to be one of  identity. Martha’s desires stability and security as part of her identity which is why she endures the abuse as long as she has, Rufus defines himself by the the type of car he drives, the amount of women and money he has… yuh know .. all that $h!t hyper masculine men think are important, and their son Adrian [Levee Rodriguez],  wants nothing to do with his father and talks about changing his last name to his mother’s maiden name, among other things in an attempt to erase that part of his identity. 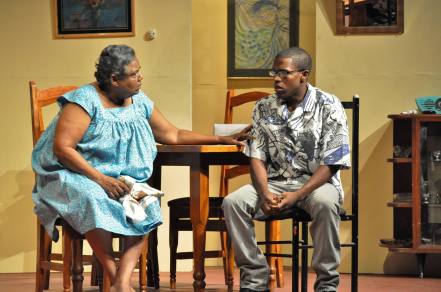 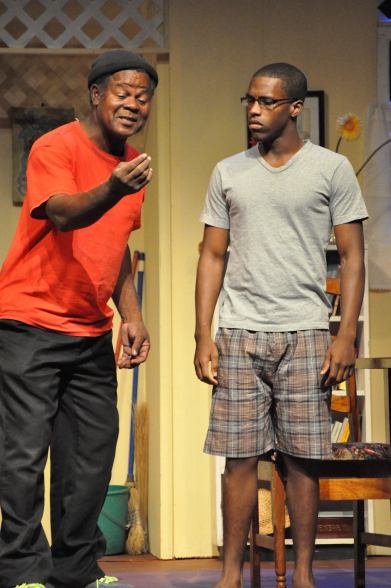 The play is set in Barataria, Trinidad, W.I in 1986 (which is well represented in the set design and construction by Cyrus Sylvester– It looked like my grandmother’s house –with cocoyea broom and the cabinet with the “good set of wares” that is only for when people come :-P,  and costumes by Margaret Sheppard, although I would admit that Levee’s small frame glasses had a more contemporary feel, not in congruence within the period it was set) but remains a timeless and very relevant piece of work. I sat there in the theatre taken in and fully engaged by the performances… Ah mean from Errol’s first entrance, and his characterization of Rufus – my blood ran hot beneath my skin. He mad it easy for you to hate him, and hate him I did! Theresa’s transitions and the way her  posture changes in Rufus’ presence; her shoulders would hunch over and her body would literally  curl in on itself in some futile attempt to disappear, and she begins to move tentatively when she walks as if tip toeing on eggshells, a great contrast to the more confident stride she has in his absence, and Levee, though I would admit that some of his words were lost in his articulation, he told the story with his strong interpretation. They sold their characters and I can say that because I know these people. A director I frequently work wit calls it “the shock of recognition”: where you see yourself or someone you know in the characters on stage. Sangre Grande by Two was truly a slice of life… a slice of my own. There was even a confrontation scene in the story that I swear was a page from my own book, and seeing it re created on stage was like a punch to the gut. I felt so much emotional tension in the theatre that whenever the comedic, poetic and hopeless romantic postman Dalton [Eric Barry], with an interest in Martha, would ride in on his “Two wheeled chariot”, it was a welcomed treat. How could you not love Postman Dalton? Lyrics fuh so!! Lol. Both he and Rufus [Errol] Stole the show for me in two very different ways.

Not to be forgotten is Marta’s Daughter and Rufus’ Step Daughter, the ‘a bit too familiar’ Desiree [Shannalee de Freitas], who’s character I just found irritating and annoying. I wanted to take my shoe off, pelt it her and scream “WTF yuh have no respect fuh yuh modda jed!!!??… You eh have no respect fuh yaself???!!” Oh! I was not too sure about her costuming though, it looked a bit modern, but I can’t remember what women used to call fashion back then, and yuh know ole styles coming back these days… but just putting it out there.

Opening Night however did not go off without a hitch. Lights kept going up while the stagehands were removing/ changing props during scene changes. So there was always this mysterious group of people in black trapsing around in the people house like it was no body’s business. I constantly had to question who was at fault during these incidents.Was it the lighting board operator?… were the stage hands moving too slow?… Where the hell is the stage manager who is supposed to be coordinating these things? It occurred more frequently in the second act and it looked as though the stagehands were becoming complacent with it… a kinda ‘well the lights done up on us… let me not even bother to hurry up’ disposition, Oh! And one more thing…. I felt the Police Officer i and ii [Tyker Phillips and Leslie-Ann Beckles] needed to commit more to their characters – especially so as they were silent roles. I was not convinced.

All that aside, I truly enjoyed the journey and experience that was Sangre Grande by Two. I hope to return on June 7th 2014 to see Jesus Paterson in the role of “Adrian”. Jesus boy! ah comin’ again jus fuh you eh!!! :).  Sangre Grande by Two continues June 6th to 8th at the Little Carib Theatre.

#ArtsBizTraining 🎓: Learn to develop your creative business while overcoming emotional & psychological blockages to your success.