Penelope Spencer, together with an all-star cast, exposed the folly of everyday Trinidadian life in this production.

‘XXX-Posed! Who Vex Lorse!!!’, written and directed by Penelope Spencer, is a Funny Farm Factory Productions and 3Hah Theatre Company production that was staged at the CLR James Auditorium at the Cipriani College of Labour and Co-operative Studies on February 27th. In addition to Penelope, this production also stared veterans Nikki Crosby, Debra Boucaud Mason, Leslie Ann Lavine, Abeo Jackson, Kern Samuel and Conrad Parris who depicted “Trini life” through a collection of scenes that focus on themes such as parenting, men, in-laws, hair and politics. In her opening remarks, Penelope shared that the stories portrayed were based on her observations of Trinis. That said, given the rich and varied subject matter, this production showed glimpses of great potential… yet stopped short of reaching for it.

The play opened with Kern serving as the defacto narrator. His character, a British anthropologist akin to those of National Geographic Channel’s documentaries, moved the play along from scene to scene; the first of which sets the tone for the rest of the play. Parenting was the theme of the first scene with Penelope and Debra as a mother and her teenage daughter in a scene that bared a close resemblance to similar scenes found at a comedy tents. There were witty one-liners, clever retorts and comical dialogue but no character development beyond the stereotype of the parent that thinks beatings is the solution to her child’s indecent behaviour. Granted, Penelope and Debra possess the acting chops and comedic timing to wring the scene dry but this is as far the scene went with regards to a plot.

The scenes on men and in-laws once again drew heavily on stereotypes: the Trinidadian man as a player (Conrad) and the meddling mother-in-law (Nikki in her granny persona). Stereotypes may be useful for the purpose of quickly establishing characters however, the scenes would have benefited from greater development of their characters beyond the stereotypes. Still, Conrad and Nikki’s performances did evoke laughter. The play’s most unfortunate scene was the scene on hair as black women’s hair was the target of a hairdresser’s (Penelope’s) derisive humour. Jokes about African hair, particularly when dreadlocked and straightened with extensions added, came off as outdated and ignorant and would have surely caused discomfort for a diverse audience (a few of whom wore dreadlocks or hair extensions). I found them cringe-worthy and was disappointed to see that racially-charged humour found a place in local theatre. The final scene on politics featured caricatures of local politicians and a flamboyant male was thrown in supposedly just for the fun of it.

These are all easy targets for comedy but several opportunities for a more substantive (and perhaps funnier) production were missed if only as much attention was placed on plot and character development as was placed on jokes. Each scene appeared to be a string of jokes on each theme held together by a plot rather than a humourous plot based on the themes. The end result were scenes that seemed to go nowhere.

I will acknowledge that a production such as ‘XXX-Posed’ is intended mainly to make people laugh so… If you enjoy comedy-tent style comedy with less vulgarity and set in the trappings of theatre then ‘XXX-Posed’ may be for you.

‘XXX-Posed’ will be at  the Southern Academy for the Performing Arts, Saturday March 7th at 8:30pm and Sunday March 8th at 6:30pm. 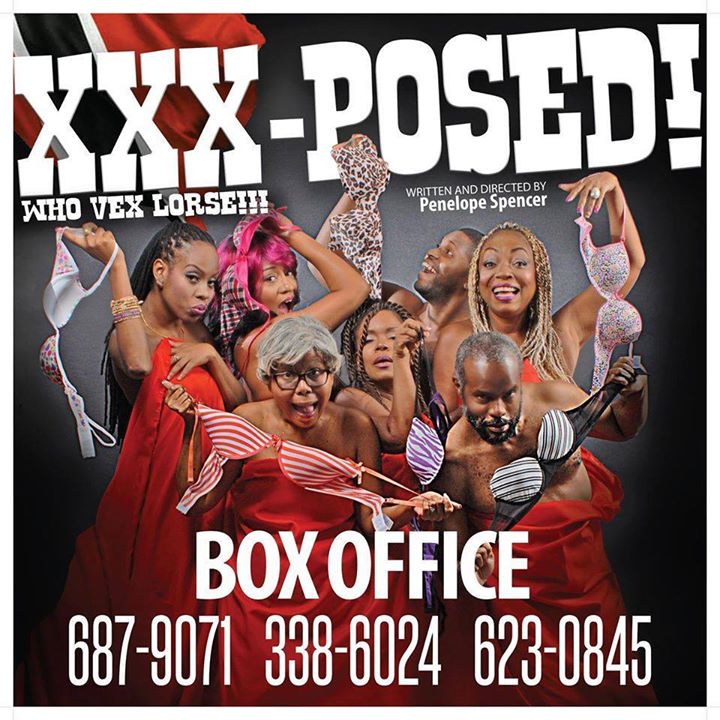 DEADLINE EXTENDED ⏰: Sign up for your fathers, grandfathers, and elderly family members. We're still searching for a friendly looking elderly male 👴🏽, for the lead role in a Regional Alcoholic Beverage Ad 🍻 w/ @caribbeancrews