I had the pleasure of being asked to write a review for the RS/RR Productions 2015 play: “Looking for Mr. BIG” which was written by Ricardo Samuel and premiered at the Central Bank Auditorium on Thursday 19th March, 2015 and was scheduled to run until Sunday 22nd March. The cast was a mixed bunch, with local theatre industry heavy weights such as Richard Ragoobarsingh, Debra Boucaud Mason and Clifford Learmond juxtaposed with some unfamiliar names and faces, (to me at least), in the industry. Yet, such is the dynamic between Ragoobarsingh and Boucaud Mason that, the inevitable chemistry and unison of the pair contributed to the play’s overall performance; ranging from directorial duties, having main roles and even assisting the supporting cast as a medium through which they, (the supporting cast) could feed off of. These two really helped to grease the wheels of the play. All of the posters and ad’s billed this play as a “belly bustin’ comedy about money, politics and sex.” So, “on, on” to the review!

The play, designed to be a parody of Trinidad and Tobago’s politics, was well written and directed, and as in most comedies, there is a farcical element present. The dialogue between the characters are generally believable and there is evidence of repetition which was able to engage the audience. The majority of the actors are accustomed to working with each other, (save for “Sunny Bling” in what was his theatrical debut) which enabled the onstage acting to flow as smoothly as possible.

The set was well designed in terms of furnishings but, the lay out of it proved to be a bit flat and cramped based on the notion which the playwright/director wanted to achieve. That is to say, for a wealthy politician/businessman’s home/guest house, the lay out of the stage did not readily translate to such. The lighting design was congruous with the music, mood and acting in the play and the musical scores which were utilized were generally appropriate, sometimes comical and even offered a hint of foreshadowing. Act One for example, opened to “The Pink Panther’s” theme song which, in conjunction with the lighting design’s application of a bright yellow light, helped create a light mood and set the tone for a comical, farcical and perhaps, even animated production, while the theme song for “James Bond” movies which opened Act Two  alluded to a ‘mysterious, secret agent/spy.’ Other lighting effects were also employed depending on the situation involved; for instance, a disco ball effect when the protagonist became excited at the thought of a proposed sexual tryst, whilst blackouts were used to transition between the various scenes.

Although an original piece being staged for the very first time, the main themes of the play are ‘strangely’ familiar. A post-viewing interview with a few of the cast members and one of the directors confirmed the following notion: local theatre is mainly confined to one genre, a comedic genre which tend to garner plenty material from our political affairs as well as sexual relations between the genders. One of the play’s directors mentioned that our local culture embraces the comedy genre more readily than other genres, thereby making comedies much more commercially viable. This is not to say that local theatre productions focus solely on sex and politics but even when more serious issues are brought to the fore in theatre, it is usually in a comedic genre in which those issues are presented, numbing the seriousness of the more pertinent topics. “Looking for Mr. BIG”  incorporates several episodes from Trinidad and Tobago’s political climate over the past ten years or thereabouts. As such, subtle and some not so subtle references to actual occurrences were used in the play  but were attributed to have allegedly been done by the characters.

The playwright uses several literary devices such as foreshadowing, repetition and puns to name a few. Foreshadowing was employed throughout the play not only with the props but also through the characters dialogue. For example, Tina the maid (Debra Boucaud Mason) referenced the “Play Whe mark” “Number Four ” or “dead man” in the first scene. She also engaged in repetitive lines to emphasize/mimic local ‘dialect’ which also had a spin-off effect as the audience was able to become engaged by helping her to finish one of her ‘punch lines.’ Of course, with sex being a main theme, there are a lot of sexual innuendos in the characters’ dialogues. The script is very solid and the experience of the seasoned actors helps to alleviate some of the minor flaws and glitches which occurred with the actors and the play itself. Based on the crowd’s response and reception of the actors, the play lived up to its’ promise of delivering “belly bustin’ comedy,” as the audience was rolling with laughter at several junctures during the play.

Considering that the final night of its’ opening run at the Central Bank Auditorium was at near capacity and the crowd was very ‘warm’ throughout the play, I would say the play was a hit. It always helps when you have industry stalwarts acting and directing in a production but to have two carrying out dual functions only added in making the play a success. Despite all of its’ successes  there are still minor adjustments to apply to it, which I am sure that the production team will work assiduously on to perfect for their upcoming future performances so I would give “Looking for Mr. BIG” a 4 out of 5 rating .

In closing, just who is “Mr. BIG?” Well, to get your answer, simply go to the Central Bank Auditorium from Friday 27th – Sunday 29th March, 2015 for the next viewing of “Looking for Mr. BIG.” 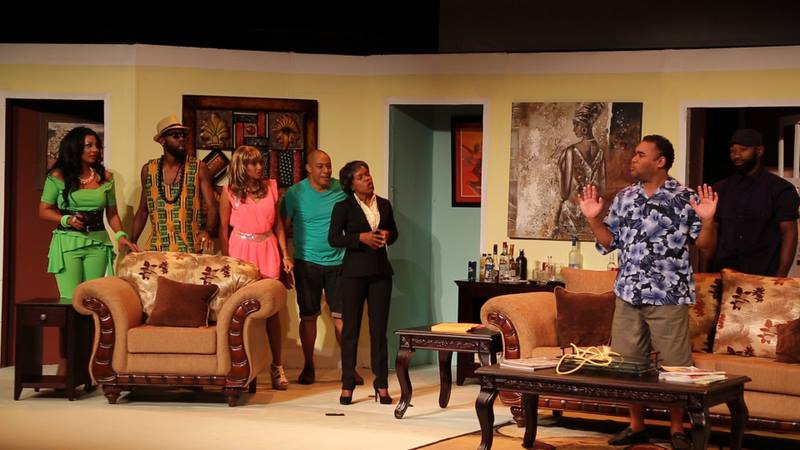