Mark Buss on de Water Taxi, a Raymond Choo Kong Production, is a fine frenzy of farcical fun. Choo Kong productions are famous for their fast-paced, bacchanal-ridden comedy and when I saw the play at the Cipriani Labour College on Saturday the 7th of October, it more than lived up to this reputation.

Contrary to what the title might have you assume, the play does not actually take place on the water taxi. It takes place in the house of Henry (Choo Kong) and Jeane (Rachel Bascombe) Poontin. Henry is an accountant who works in San Fernando. He makes his way to and from work via the water taxi with a briefcase containing his files and the occasional sardine and hops sandwich. On this fateful day, however, Henry mistakenly picks up a briefcase resembling his own that instead of sardine and hops, contains 12.8 million dollars. In the ensuing madness, Henry tries to convince his wife to suddenly move to Costa Rica with the money while dealing with troublesome policemen, a hilariously brash taxi driver named Bolo (Trevon Jugmohan) and Vic (Arnold Goindhan) and Betty (Rhesa Samuel), Henry and Jeane’s longtime friends. All these characters come together, collide and mix in surprising and truly hilarious ways from the start of the play to the end. The physical comedy, the superbly witty dialogue and a great cast really make this play a comedy that delivers.

When I read the title Mark Buss, I was hopeful that Choo Kong Productions would mix things up a bit and try something new with their set design. I was interested in how they might portray the water taxi. However, the set design was a slight variant of the regular fare, the interior living room in the main characters’ house. But this didn’t keep it from being successfully entertaining. A central couch was well utilized and helped produce many laughs. The rotating cast of characters that ended up under a blanket on the couch made for some of the best punchlines in the show. The doors on the backdrop provided multiple exits that kept the characters’ movements on and off the stage dynamic and interesting. The layout on the whole felt believable and made it easy to imagine the rest of the house built up around the stage.  Another positive practical aspect of the performance was the superb projection and articulation. The actors’ lines were delivered clearly, letting the audience catch even the hilarious mumbled lines from Bolo the taxi driver as he’s sent outside by Henry.

Speaking of Bolo, Jugmohan’s portrayal of the loud-spoken taxi driver with the country slang was unexpected and delightful. When he first bursts in with, “I is Bolo! De one and only!” the audience eats it up. Bolo was, in most instances, a scene stealer. Choo Kong as Henry was as funny and engaging as one would expect. Although the dialogue between Choo Kong and Bascombe at the start of the play was a slight bit rocky, they quickly found their groove, sliding into their lines with practiced ease and built up the rhythm for the action to come.

Rhesa Samuel was also another good performer in her role as Betty, the bored wife who just can’t get enough of the excitement that the Poontins have found themselves in. Her glee at the entire unfolding bacchanal was infectious. Her husband, Vic, was supposed to be a sort of foil for Betty’s character. Goindhan’s portrayal of the character, however, was mixed in its likeability. The moments when this character worked best were the moments when it felt like the actor was having the most fun, like when Henry and Vic try all sorts of shenanigans to switch briefcases with the young Sergeant Sorzano played by Christian Subero. Subero’s character went through a funny decline in patience with the other characters’ madness throughout the play. His counterpart, the corrupt bribe-taking officer played by Kevon Brooks, was similarly well acted and humourous as he got more and more entwined in the Poontins’ lies.

Mark Buss takes a premise that feels like a universal dream at this point in Trini society. With a fresh budget and raised gas prices, a story about a regular Joe serendipitously coming upon $12.8 million feeds into our secret desires. The audience wants to be in Henry’s shoes so badly that connecting with the main character here feels like a foregone conclusion. Henry trying to justify keeping the money – it is drug money, so it doesn’t really exist, so he isn’t really stealing – was just one example of how clever the script  was. The quick-fire dialogue, the multiple alibis to keep track of, it all balances on edge and keeps the audience well invested in the goings on of the play. Mark Buss on de Water Taxi was consistent on the funny, high on the energy and refreshingly witty; another job well done for Choo Kong and company. 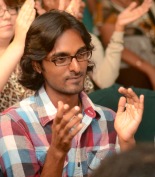 Hey, Shazim Khan here! I’m a student of literature at UWI, which happened as a result of a long time fascination with words in all their various forms and mediums. I also have a deep affinity for the arts on the whole, especially music of all genres – I’m an amateur guitarist.

I’ve recently been introduced to the fascinating world of theatre. The spellbinding magic that can be so expertly conjured on stage has captivated me and inspired a desire to learn and experience as much as possible of this timeless and magnificent craft.