How do the law and religion intersect?

What harm can be done if religion is allowed to unduly influence the laws of the land? These are the questions asked by Arthur Miller’s The Crucible, which presents a partially fictionalised account of the Salem Witch Trials.

The classic play was recently performed by students of the Department of Creative and Festival Arts, UWI, St Augustine, as their end of year theatre production.

It begins with the discovery of some village girls and a slave dancing in the woods, in an attempt to conjure spirits from the dead. When they are accused of witchcraft, they defend themselves by accusing others in the village of witchcraft, leading to people being arrested and executed. The girls are led by Abigail Williams (Anna-Marie John), who has a specific target in mind: Elizabeth Proctor (Rayshawn Pierre), the wife of John Proctor (Du-Wayne Hinds), the man with whom she had an affair. 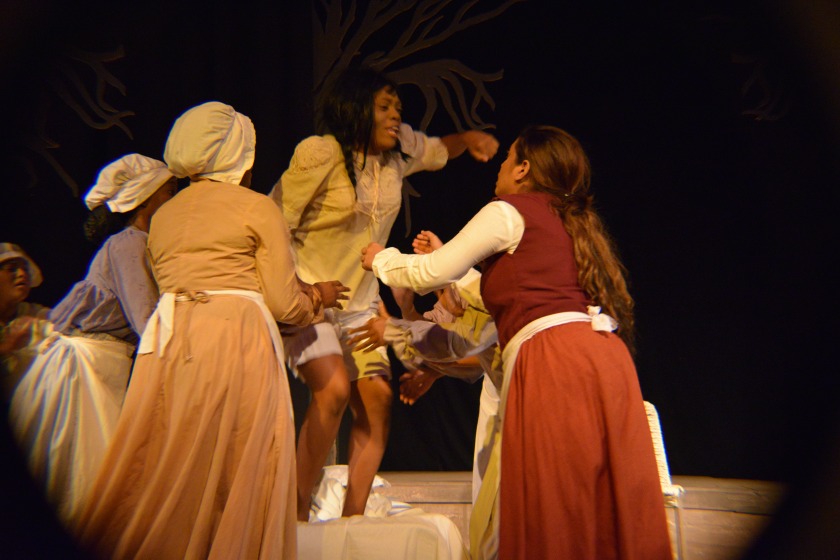 Director Dr. Dani Lyndersay said great plays can change their meaning with the passage of time and shifts in attitude.

She said the playwright Arthur Miller reveals how an individual’s struggle for truth often conflicts with society, the abandonment of the due process of law and one’s religious beliefs.

Set in the 1690’s, The Crucible was written in 1952 as an allegory for McCarthyism and the corruption of truth. Lyndersay invited audiences to regard and see the disturbing events of the day, including the surge of populist anxieties and nationalist chest-beating, through the lens of history.

“For as Miller warned, the sordid nature of fear, blame, and the evils of narrowly prescribed ideologies were not only relevant in 1692, but are still timely and urgent today. John Proctor’s cry ‘Is the accuser always holy now’?, retains its disturbing relevance. We present for you the clashes of truth between those characters who profess to speak it, those who profess it, those who live it and those who die for it.”

The production did indeed offer a chilling glimpse of what can happen when religious zealotry is unchecked by the rule of law, and is allowed instead to be administered by zealots.

Michailean Taylor as Deputy Governor Danforth gave an excellent performance as a judge who is so fixated on rooting out sin that he refuses to listen to evidence given in good faith by otherwise sinful people.

Special mention of spectacular performances must be given to Du-Wayne Hinds, for his portrayal of John Proctor as a man of stern conviction, who having made a mistake, was not willing to keep his life at the expense of his honour; Rayshawn Pierre as Elizabeth Proctor, perfectly mingling suspicion, coldness and genuine remorse; Anna- Marie John as Abigail Williams, a cold-hearted woman willing to manipulate those around her to her own ends, including wishing the death of a rival in love, Michailean Taylor as Danforth, and Josiah Moodoo, as Reverend Hale, a man of the cloth who was willing to stand up for what was right under the law even if it went against the concept of sin, and was tortured by his failure to save his flock.

Taylor said based on the play that law based only on theocracy does not work. Actor Brendon Lacaille, who portrayed Thomas Putnam, who he described as another villain of the piece, said he believes that religion has influenced and continues to influence all kinds of laws. However he said, the danger lies in extremism.

“I think being unwilling to change and to understand the other point of view, and also injecting things like fear and outright nastiness and whatever, I think that is the problem. As you realise, as Millier tries to demonstrate in his story, is the fact that extremism, when you have those kinds of machinations working, usually you never really prevent what you’re really trying to prevent, and the things that you are afraid is going to happen, happen.”

The play was a triumph for the DCFA, especially in terms of the scenic design, costuming, lighting and of course the acting, with the audience clearly feeling the tension being built up and the climax being perfectly executed.