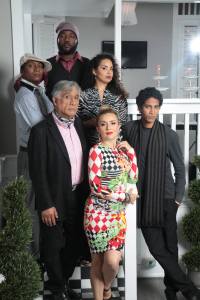 “The play is about a Trinidad situation of a family in crisis. Comedy, as any good Trinidadian knows, can be found in all aspects of our lives and even in the most unlike of scenarios…When someone loses his wife and finds out that his son is gay on the same day—we laugh (Norman is that You; 1999), someone gets “horn” and physically abused—we laugh (Diary of a Bad Red Woman; 2014); we even laugh at funerals (Death at a Funeral; 2010.” (Trinidad and Tobago Guardian, 21 Feb 2015)

HEAR THIS NAH! (Stole this phrase from my good friend Lalonde Ochoa…hope that he forgives me.) On Thursday 26 February, 2015; I FINALLY made it to my first “Raymond Choo Kong” play/production (“Party Done for the Freak Next Door”)! Braving the inclement weather meant that I missed the house announcements. However, I don’t think that seven minutes would disqualify me from having the ‘right’ to write a review…so let’s get to it!

It was  amazing to see that despite weather that would normally keep Trinis away from school and work, Queens Hall was packed and the curtain opened on time. If the remaining  nights are so generously attended, I expect that this play would be an economic success (As most shows of this genre tend to be in Trinidad). This performance boasts a star-studded cast including multiple Cacique Awardees; the cast consisted of Arnold Goindhan, Kevon Brooks, Caroline Taylor, Raymond Choo Kong, Cecilia Salazar and Trevon C. Jugmohan.  Unfortunately, the opening night was not perfect but it was not horrible either, it was ‘good’ (How do we really measure quality?). The tragedy of comedy is that we (the audience) laugh when we should cry, converse when should be silent and ignore what we should pay attention to e.g. we laughed uncontrollably at the following line: “Look at Bill Crosby, seventy-six woman lying on an innocent man” (Barry). Furthermore, the play “Party Done for the Freak Next Door” seemed more a tragedy than a comedy in dramatic style, since the “Tragic Hero”, deals with a “tragic flaw” and eventually “falls from grace”. These are all attributes of a tragedy, not a comedy.

The plot was ‘interesting’ (full of bacchanal; scandalous behaviour/happenings; twists and turns; intriguing storyline etc). The performance surprised me because I expected to see a comedy with sex scandals etc, but instead I saw a tragedy with comical moments. In essence the script deals with a number of social phenomena and issues (crime and deviance, kinship/family, love, gender roles, etc) which were presented satirically on stage (on a side note: Brendon O’ Brian said that, “satire is funny because it’s one news report away from being true”-does this understanding have any bearing on the play/performance? I don’t know); the most disconcerting thing about the performance is the audience’s response to said ‘issues’, We laughed at everything! (Even things that weren’t comical) This was done so frequently that it caused me to miss large portions of dialogue. (Sometimes I think as a people, we trinis need to grow up!) Ok enough ranting…moving on! The first half (ACT) was solid, the action moved from “moment to moment” at a good pace, the vocals were audible, but I didn’t understand the use of music, except for the lyrical content in some cases. So yay first half! However, the second half (ACT) flopped, it contained a significant amount of dialogue and the action seemed to lose pace. Furthermore, the only interesting action(s) that appeared in this half were those scenes featuring the silhouettes of the “Freak Next Door” and T. C. Jugmohan’s character.

THE ACTING: I’ve seen these characters before! I felt as if the acting was lazy: (NB. compared to other productions/companies it was very well done, the characters were well-crafted etc.) Experience teaches the ‘tricks’ of the trade, so actors have at their disposal said tricks and previous discoveries to ‘produce’ a character. In this show, I felt as if the characters took little effort to assemble, although some might not see this as an issue and may welcome seeing their “favourite” actor in his “normal” role, I would prefer to see skilled/talented actors ‘work’.

When you are a multiple cacique award winner, who can really critique your work? Commonly known as “Pinny”, Arnold is an actor that every director would be grateful to have, he knows his work. However, maybe he knows it too well, I’ve seen him play this character before, I wish he was pushed more, but I can’t pick out any significant flaws in his performance (if any existed).

Honestly, I haven’t done my homework so I don’t know much about Mr Brooks, additionally I am unfamiliar with his work, but I believe he did his job well. I heard everything he had to say (except when the audience burst out laughing). Maybe, a little more work on threading the audience’s laughter needs to be done; his movement across the space was fine and his characterization was good. So I saw no reason to dislike his acting. Although I hated his character and wish I could do harm to Curtis, I can safely say that Brooks is Iere.

If there was any character “my blood cyar take” it was Pauline. Her voice was irritating, so much so that I was relieved whenever she wasn’t speaking. Pauline was intentionally crafted to be disliked, in addition to her voice, her body movements, the way she speaks, the way she relates to the other characters etc were easy to dislike, so well done! However, I have one little critique, I felt as if Ms Taylor overplayed her character from time to time, it was a little too obvious that she was acting so much so she was caught waiting for the audience to laugh at what she believed were her character’s punch lines. But, she did a good job regardless.

The most likeable character on stage, Barry reminded me of Jeff Dunham’s puppet “Walter” (a mean old man who says comical or satirical things that we appreciate listening to). He is the “tragic hero” with a “tragic flaw” (his obvious disrespect for his wife; blind trust in and love for his son) which eventually leads to him committing murder and suicide. Choo Kong played his character well, but I suspect that he dropped lines from time to time, since the pace of the play seemed a bit odd in some of his scenes. I could be wrong.

Another well-known cacique award winner, Salazar looked more a “Miss Miles” than a “Janice”. Arguably  the best actor to have on your cast, and an easy ‘director’s pet’ I felt as if her role demanded little from her. Other than my ‘pet peeve’ for not working talent and skill hard enough, there is little advice that can be given to someone who has been doing the job before you dared to dream about it. However, I dare to question  the necessity of some of her stage moment, there were times when I was curious whether she forgot the blocking. But it is Cecilia Salazar and picking out possible flaws in her performance is a task I’m not ready to try.

I’m not quite sure what to make of Alan, I wonder if it was necessary to see him (the character) on stage, I’m yet to figure out the value of his presence. Character aside, I believe Mr Jugmohan did a good job in his presentation. Maybe, a bit more work on stage presence is needed, but like “the freak next door” I would have been satisfied with just seeing Alan’s silhouette at the end of the play. (Maybe it’s a script thing?)

THE SPECTACLE: Lacking…The majority of the play was done with white lights, the stage was flooded for most of the performance and blackouts were used intermittently, but not regularly. The only significant use of lighting effects that I can recall is the use of silhouettes on a screen. So the lighting side of the spectacle was a little banal for this project.  Additionally, the music felt out of place, in relation social context (since the play was local in setting, context etc, maybe local music could follow suit – my real issue with it is that I prefer live music, I believe it sounds better than recordings in most theatres); I don’t have any problems with the costuming; the props didn’t bother me either, but I’m not sure what to say about the set…It looked good, but I don’t understand it. It seemed to be a hybrid between a realistic set and an abstract piece of art, but I’m still not sure what to make of it.

The play was well put together, it flowed well, moved from moment to moment efficiently, everything that needed to be seen was seen…honestly, I’m not sure if I can really give a cacique award winning director any tips. However, I think closer inspection might need to be paid to some of the stage movement, there were moments that I didn’t understand the motivation or reason for moving in the space. Additionally, the second ACT should be tighter, and maybe something could be done to make the “wordy-ness” of the script more bearable.

So to end the review: although the play was marketed as a comedy, in terms of dramatic structure it was a tragedy. Furthermore, I consider it tragic that the audience received such serious issues in such an immature manner. It was a good performance, but I expected more from such a skilled cast.

PARTY DØNE for the FREAK NEXT DOOR is being HELD OVER b Popular Demand at CIPRIANI COLLEGE OF LABOUR • Thursday 5 to Sunday 8 March 2015. See Flyer for Details